Planning Features into Releases: Effort Calculation | Targetprocess - Visual management software
We use cookies to deliver the best user experience on our website. To learn more, visit our Privacy Policy. By continuing to use our site, you agree to our use of cookies — I Accept

Building high-level plans or roadmaps helps teams to understand how much effort they need to complete the work item and when they can complete it. It also helps to identify earlier that the team is off schedule and probably needs to change their strategy. Let's have a look how high level planning is possible with Targetprocess and look into the Feature effort calculation.

It is now possible to plan Features into Releases by comparing effort needed to complete the Feature and Release Capacity.

Initial Estimate is effort roughly estimated for the Feature before splitting it into User Stories. This field was introduced to give the ability to estimate work at a high level and create longer-term roadmaps.

Effort is  the value showing the amount of work which is required to complete the Feature.

While planning Features into Releases we calculate the sum of “Effort To Do” field of Features, assigned to a Release.

On the picture below all the possible variants of capacity badges are shown. Please, click on any badge to read the explanation.

Total Effort To Do

This badge shows the sum of all EffortToDo in a cell. It can be displayed in a Backlog cell or in a Release cell if Capacity is not set for the Release.
Note: only Features remaining effort is calculated, not the total effort.

This badge illustrates that in current Release all assigned work is completed. It means that all the work items either in final state or their total remaining effort is equal to zero.

This badge shows how much work is completed in current or past Release. It is calculated as follows:

This badge is useful for planning, it indicates if there is available capacity in a Release. The load is calculated as follows:

Where Effort To Do is the sum all Features and User Stories EffortsToDo. And Release Capacity is the value set into the custom field "Capacity" in Release entity. In order to set Release capacity, you need to have "Capacity" custom field for Release. The value can be set either manually or automatically as the sum of Team Iterations capacities assigned to Release.

This badge shows that your Release load is calculated roughly, since there are some Features assigned to more than 1 team (collaborative Features) and we do not know, how to allocate the Initial estimate of the Feature until child User Stories are created. Therefore, in order to make the calculation of Release load more accurate it is better to add child User Stories to Feature, assign them to appropriate Teams and give them estimates.

You can click on the badge and then "focus on collaborative features" link to leave only features that are assigned to more than 1 team.

This badge is useful for planning, it indicates that the Release capacity is overloaded. The overload is calculated as follows:

Where Effort To Do is the sum all Features and User Stories EffortsToDo. And Release Capacity is the value set into the custom field "Capacity" in Release entity. In order to set Release capacity, you need to have "Capacity" custom field for Release. The value can be set either manually or automatically as the sum of Team Iterations capacities assigned to Release.

Let’s go through 2 cases that may occur and look at how we calculate the Release load. 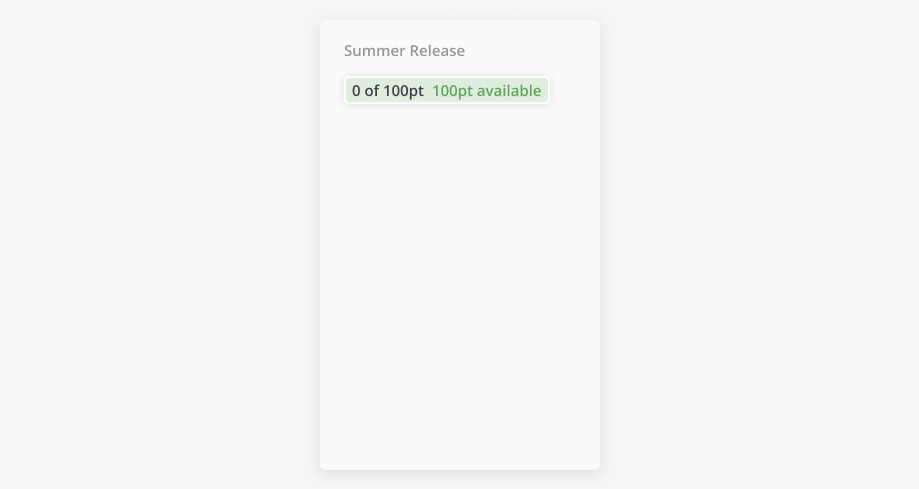 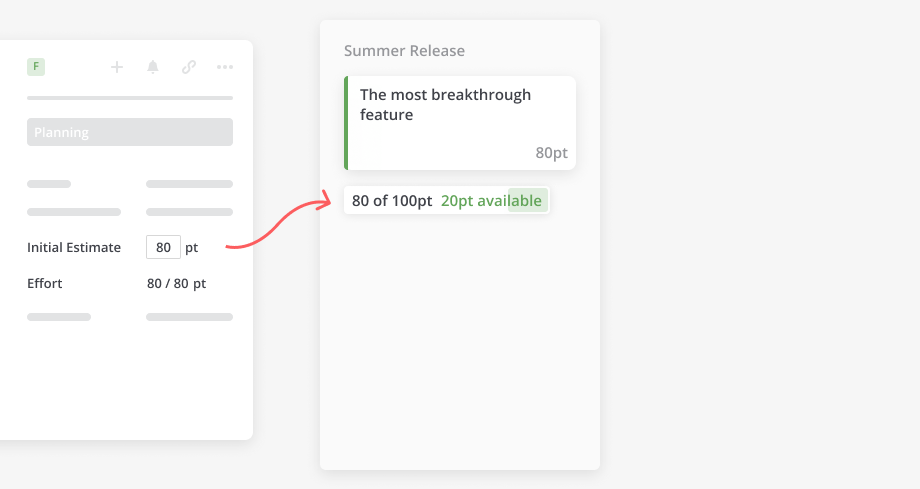 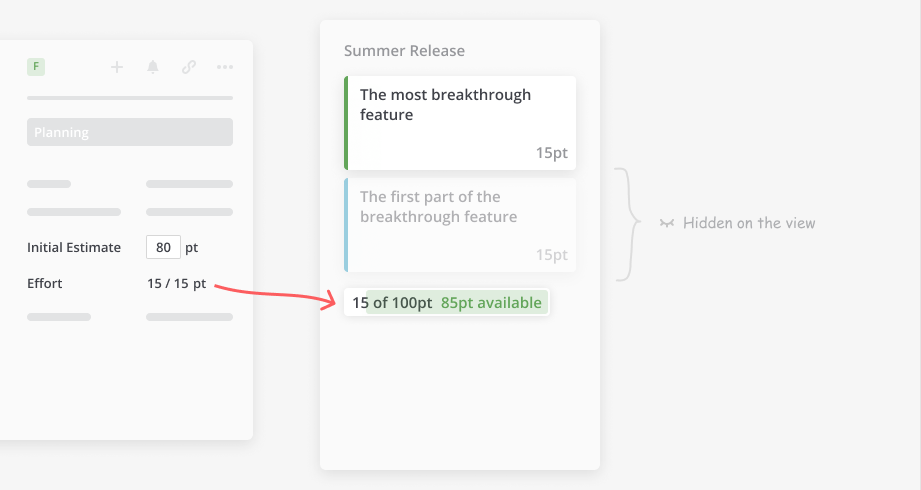 A Feature has child User Stories, which are assigned to other Releases 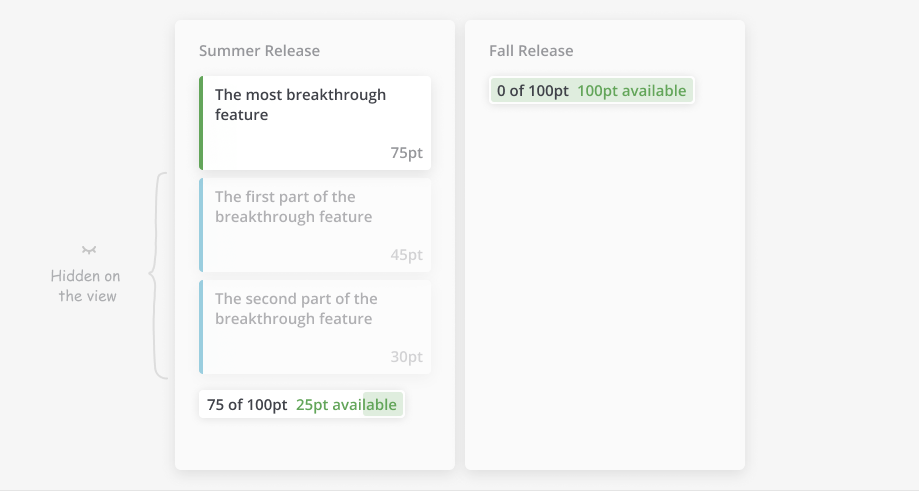 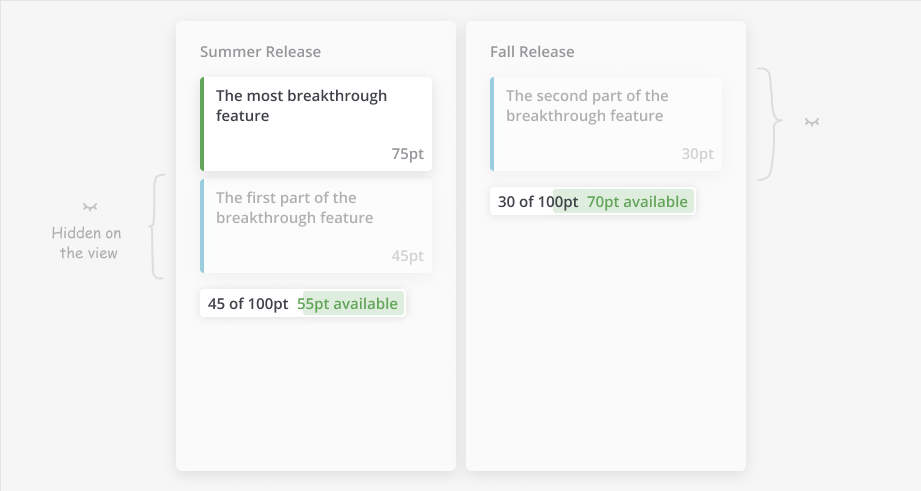 Planning Feature and its User Stories

Please note, that child User Stories need to be assigned together with Feature. Only in this case the work items will influence the Release load.

Most Typical Issues with the Feature Effort Calculation:

Still have a question?

Email us
The more details you can give us the better
Live chat
Prefer instant messaging? Try our live chat
Service Desk
Add tickets, comments and track status in our Helpdesk
Slack Community
Shape the future direction of Targetprocess
Find out more about our APIs, Plugins, Mashups and custom extensions. Join our community of passionate users and even discuss directly with our developers.

Get a live
product demo

Let one of our product specialists create your account
and shape Targetprocess for your company needs.